Standlake is a village and civil parish situated on the A415 approximately 5 miles (8 km) southeast of the market town of Witney in the County of Oxfordshire. The city of Oxford lies some 10 (16 km) miles to the east. As of January 2013, the population of Standlake was approximately 1400 and there are some 560 dwellings.The River Windrush flows through the village and joins the River Thames at Newbridge, 2 miles (3 km) to the south. more

There are two Village Notice Boards, both located at the Post Office and Stores. The main information board is located by the bench and a publicly accessible board adjacent to the post box.

Sign up to Standlake News to receive emails about village events. Emails are distributed regularly each week. Standlake News will send out messages that are of interest to residents, which come from the local clubs, societies, schools and churches.The Parish Council forward messages about local planning applications, road closures and the parish council meetings. West Oxfordshire District Council forward messages about events in West Oxfordshire. Sign up here:

The Village Notice Board

No. 418 Standlake to Eynsham with connections to Oxford and Long Hanborough Times and Routes 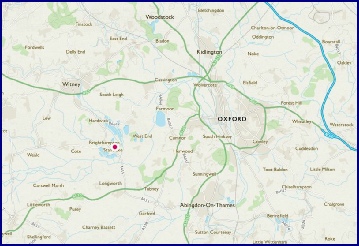 The next PC meeting will be held in the Youth Club, Church End

Members of the public are welcome to attend

Speeding in the village is a known problem.  Since the formation of the Standlake & Brighthampton Speedwatch Group earlier this year over 500 offenders have been reported to Thames Valley Police.
Following a meeting with Oxfordshire County Council a number of other traffic calming measures are being explored.  Consideration is also being given to the implementation of a 20mph limit on:
- Abingdon Road
- Aston Road (Brighthampton)
- Church End
- The Downs
- High Street
- Rack End
It may be that some would like just to see a 20mph limit on, for example, Aston Road, High Street, Rack End and Church End hence putting out the above list rather than just saying 20mph throughout Standlake.
The Parish Council welcomes your feedback in the first instance by emailing speed20@standlakepc.org.uk by the 31st August.  We look forward to hearing from you.